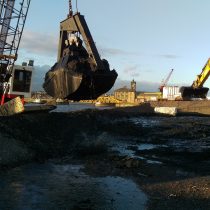 Dredging is a topic that has been the centre of much debate over the years. Due to EU rules about how to deal with the material recovered, some authorities have slowed the process down. River or harbour dredging is often absolutely necessary.

It is challenging when the dredged material is hazardous. Using our innovative LockedIn® process we can treat the contaminated materials, reducing or eliminating disposal costs.

Dredging is a process that removes accumulated sediment from the bottom of rivers, lakes, harbours and other bodies of water.

This happens for several reasons. The main aim is to increase the depth of the body of water, such as rivers or harbours, as the build-up of silt can make it difficult for vessels to use it.

Materials (or dredge) is either partially or totally submerged allowing sediment to be gathered. Traditionally, the material that is dredged, or dug out, is sent to a different location. Prior to new rules, recovered dredge would be dumped at sea, but this can affect marine life, such as shellfish.

If the material contains no contamination it is often reused, but there is a high cost involved in transporting and treating material off-site.

And a real problem arises when recovered material from dredging is hazardous. As a result, it may be better to treat it on-site.

Why is dredging used?

There are a number of purposes for dredging. These can include:

Maintaining waterways: This is the most important reason for dredging. It restores the waterway to its original condition and depth and moves dead vegetation and pollutants that gather there.

Creates waterways: Dredging extends harbours and ports. For example, this was the reason for an extension we were involved with at Killybegs Harbour in Ireland. The harbour needed extending to increase docking for extra fishing trawlers. For many harbours and ports, dredging allows cargo vessels of all sizes to dock without running aground.

Excavation: Removing sediment is important when preparing for large building projects, such as docks, piers and bridges. We took part in treating material that was recovered from the Wear, in Sunderland, for the construction of the Northern Spire bridge.

Reclamation: As well as excavating material for construction, such as the Northern Spire project, dredging also allows for the removal of contaminates. From sewage accumulation to chemical spills and the buildup of decayed plant life, the removal of such material is essential. In Sunderland, we helped remove 30,000 tons of contaminated material from hundreds of years of shipbuilding on the Wear.

Increasing depth of waterways: Sediment build-up from accumulating debris means an increased risk of flooding in rivers. As a result, dredging is necessary to restore the body of water to its original depth.

What happens to the recovered material?

Material recovered from dredging is traditionally sent off-site for treatment. Fine reclaimed material, such as clay, can be used for land creation or construction fill. Where there is fine dirt it can be mixed with additives, including manure or compost, to create or enhance topsoil.

The real issue is when dredged material contains chemicals or hazardous waste. Many rivers around the UK and Ireland have been used for industrial purposes, such as shipbuilding. As a result, oil and other contaminants build up over time, creating a hazard.

One of the substances found within the Wear was tributyltin (known as TBT), a common contaminant that is the legacy of shipbuilding.

For 40 years, TBT was an anti-fouling paint used for improving ship performance as well as increasing durability, as it prevented a build-up of growth organisms on ships’ hulls. Due to its toxicity, TBT harms shellfish and sea dumping is banned.

Any material recovered from rivers, such as TBT, cannot be reused in its untreated state. Usually, the option is to remove the material from the site for further treatment, which can be expensive and labour intensive.

But at ATG, we can use our LockedIn® process to treat the waste. Managing Director Dr Mark McKinney explains, “In Sunderland, huge amounts of oil was recovered during the bridge construction project. There were more contaminated materials recovered than was expected, including TBT.”

Dr Mark adds, “The Environment Agency halted the works because the plans to manage the material were considered unacceptable. We were called in to assist Farrans, the construction company. We created a tailored plan to manage the hazardous dredge that met the Agency’s expectations.”

This included constructing a cofferdam, dredging and excavating from within it and then barging it to our treatment facility. After treatment, the material became landfill capping.

We are now helping recover even more hazardous material further down the Wear as part of a major roadbuilding project.

We are experts at treating hazardous material. Contact us for more information and we can design a specific plan for any dredging operation.