ATG Group opens new base in the North East of England 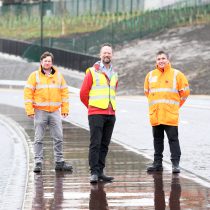 We are excited to announce the opening of a new base in the North East of England. The move is part of our plans to expand and create jobs.

The announcement of our new base at Sunderland’s North East Business & Innovation Centre coincides with a new contract with Sunderland City Council to recover waste oil.

We are currently recovering waste oil found during planning stages of the new strategic corridor near the city centre.

Managing Director, Dr Mark McKinney, says he’s delighted to make the announcement. Also, he adds that after working in Sunderland, setting up a base there made sense.

“We have already worked in the city over the past few years. We’ve worked on the Northern Spire project as a sub-contractor with Farrans. Most recently with Esh Group on the third phase of the strategic corridor.

“We have ambitious plans to grow across the UK in the next five years as more brownfield sites are developed. With bases in Scotland and the south of England, we felt a need for one in the north of England. We have a number of exciting plans for the North East base, which will create new jobs.”

Projects Director Duncan Sanders explained: “During the initial planning stage, the council engineers identified an area of waste hydrocarbons. Working with Esh Group and Environment Agency, we were tasked with safely recovering the substance two years ago. There is more to recover and as the site has now been handed back to Sunderland City Council, we have agreed an ongoing contract directly with the council to carry out those works.”

Deputy Leader of Sunderland City Council and Cabinet Member for Environment and Transport, Councillor Claire Rowntree said: “The council is pleased to welcome ATG Group to Sunderland. We have worked alongside the company on a number of successful projects so far, and look forward to working with ATG Group in the future now it has established a new base in the city.”

20.01.2022 We are currently helping Lidl break new ground in Latvia on the first remediation project in the country.   The supermarket is building a new store in the country’s capital city on a contaminated site in the capital city. And it means ATG Group's work in Riga is the first construction... Read More

23.12.2021 Merry Christmas and a Happy New Year from all at ATG Group. Our offices are closed from Thursday 23rd December. We reopen on Monday 3rd January at 9am. If you have an emergency spill are require immediate assistance over the holiday period, please call our main phone line and press... Read More

We finally receive The Queen’s Award

22.09.2021 ATG Group has finally been handed The Queen’s Award for Enterprise in Sustainable Developments. Presentation of the prestigious accolade was delayed by the coronavirus pandemic. And we were delighted that all our team was on hand to receive it at a special ceremony. We received The Queen's... Read More