What are brownfield sites? 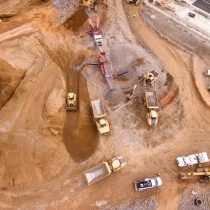 This summer, Prime Minister Boris Johnston announced building on brownfield sites will longer be subject to ‘normal’ planning rules. The government hopes house building increases across Northern Ireland and the UK without planning consent slowing it down.

According to the Campaign to Protect Rural England, there is enough brownfield land to deliver 1 million new homes! With local authorities identifying more than 66,000 hectares of such sites, it is no surprise developers are considering them.

What are brownfield sites?

In the UK, brownfield sites are “previously developed land” with the potential for redeveloping. The government describes it as:

“Any land which appears to the local authority in whose area it is situated to be in such a condition, by reason of substances in, on or under the land, that

(b) Pollution of controlled waters is being caused, or there is a significant possibility of such pollution being caused.”
(Environmental Protection Act 1990, Part 2A).”

Such sites are usually (but not exclusively) plots of land previously used for commercial or industrial developments. As a result, they are often derelict and contain contaminated soil.

Developers are reluctant to use them because of the costs associated with preparing the land. These outlays can include building demolition, re-engineering of services and land remediation.

As well as housing, brownfield land often beomes open space for conservation, recreation, woodland as well as other community uses.

To find available brownfield sites, you can view government ‘Brownfield Registers’, which lists the land that is available for housing developments. For more information, visit the government’s website.

Brownfield sites need assessing by experienced environmental consultants before the land is acceptable for development. Soil, groundwater and surface water for hazardous compounds needs analysing. If necessary, measures are taken to reduce risks and liabilities.

Development plans must be made compliant with current regulations, even with the announcement of changes to planning consent.

Special licences will still be needed to reclaim brownfield land, which can sometimes prove prohibitive for some developers. Once an environmental assessment is carried out, the next step is land remediation.

Remediation of a brownfield site removes contaminants to levels considered safe to human health. Methods of remediation on such land depend on both the type and level of contamination.

Over the past few years, technological advances allow brownfield land to be developed that was previously unsuitable. Such methods are also more cost-effective than previous ways of remediating land.

Our Brownfield Remediation methods include:

We start our process by carrying out a historical search along with a site walkover to understand the geological and hydrogeological situation. We then carry out an intrusive site survey and test the soil. If the site contains contamination, we will provide you with all the options that are available for your site, depending on your needs and budget.

Once we carry out remediation works, we carry out tests through an independent laboratory to confirm that the treated material is clean and ready for development. We also carry out any earthworks that maybe required.

ATG Group offers treatments that are an alternative to disposing at landfill sites, which saves you money.

This wheel outlines the services we offer developers for land remediation. We help developers navigate the roulette wheel of issues around developing Brownfield land with our insurance backed solutions. 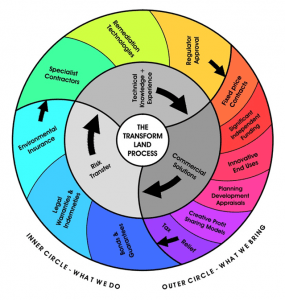 For more details about our work with Brownfield Sites, contact us today.