What you need to know about removing Japanese Knotweed 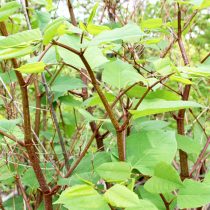 Japanese Knotweed is the scourge of house buyers, sellers and construction companies. Not only does the aggressive invasive species damage foundations, removal can be difficult. It can also reduce the value of houses by thousands.

Tradespeople comparison site HaMuch.com revealed earlier this year that if the perennial weed is found when a house is being sold, it can reduce the value by £23,530 on average!

For construction companies, the discovery of Japanese knotweed can add a massive cost to their projects. Developers who fail to contain the plant on their site could also find themselves prosecuted under the Wildlife and Countryside Act 1981 or the Environmental Protection Act 1990.

It is in everyone’s best interest, therefore, to deal with removal of Japanese Knotweed effectively and sustainably. Traditional ‘dig and dump’ methods impact the environment and are costly as hundreds of tonnes of earth is shifted.

At ATG Group, we have developed our Eraginate® Japanese Knotweed treatment which is more cost-efficient and quicker than ‘dig and dump’ and stem injection techniques.

To help explain more about the issues surrounding this invasive species, we unravel the roots of Japanese Knotweed…

What is Japanese Knotweed?

Fallopia japanoica, to give it its official name, is a weed that spreads rapidly. The plant dies in winter to ground level but by early summer the bamboo-like stems emerge from creeping underground stems and can grow up to 7ft (2.1m).

It’s growth is rapid and aggressive, as this Irish Times video shows!

Where did it come from?

Botanist Phillipp von Siebold found the plant growing on the sides of volcanoes, where its growth is kept under control by the climate and regular deposits of ash. Without these impediments, it can grow unabated, which is what is happening in Britain.

After being celebrated in the late 19th century, the Royal Botanic Gardens in Edinburgh began selling it and it became a favourite in large country estates.

Our Japanese Knotweed expert, Bernard Mullen, explains, “With its ornamental good looks it became popular in country houses, where you often still find it. The landed gentry loved it as it has stems like bamboo, so looked Oriental.”

In spring, you will see reddish-purple shoots emerge from crimson buds at ground level. The leaves are heart or shovel-shaped and up to 5.5in (14cm) in length and appear in a zig-zag pattern along the stems. The creamy white flower tassels are produced in late summer and early autumn and can reach up to 6in (15cm). Bernard says that its stems look like rhubarb in colour.

What problems does it cause?

The biggest issue with the weed is that it can swamp other plants. It can also grow through concrete and road asphalt.

Our expert Bernard says, “It can seriously damage foundations, which is why mortgage companies don’t like it. To be fair, it isn’t going to create a Jack and the Beanstalk situation! It won’t pull the house down, but it will eventually create a problem with the foundations if left untreated.”

While it is not illegal to have Japanese Knotweed in your garden, you should control it. Failure to do so could result in prosecution under the Anti-social Behaviour Crime and Policing Act 2014.

Allowing the plant to spread outside your property or in the wild is an offence under the Wildlife and Countryside Act 1981, however.

You do not have to report the presence of Japanese Knotweed within your property, but you should declare it to estate agents and prospective buyers. Should you choose not to, a buyer could sue you under the Misrepresentation Act.

How can you remove it?

The most popular methods include ‘dig and dump’ and stem injection techniques. They are effective but each type has its drawbacks.

It could cost a developer thousands to dig and dump the affected soil, which also affects the environment. Landfill sites charge a high price as they need a separate area to control its growth. With limited space available, they need to charge a premium.

‘Dig and bury’ on site is another popular method, but while it is effective at removing the weed it restricts the use of available land for development. The other issue is that the Japanese Knotweed remains on site.

Another effective method is stem injection – but this can take around three years to work. So, developers or homeowners may have to delay their plans until they are sure the weed has been dealt with.

At ATG Group, we are passionate about finding sustainable answers to environmental issues. We have developed the Eraginate® process. It is not only quick, it is more cost effective, which is why so many construction companies and developers choose it.

We can offer an insurance-backed warranty for up to 10 years, so in the unlikely event of the weed returning, we will deal with it within that time.

Our process includes cutting down the knotweed and excavating the roots. We screen the soil and handpick the biggest roots, which are suitably disposed of. We use approved chemicals to treat the remaining knotweed in the soil. Once completed, the remaining soil, which is eradicated of knotweed, can be used on-site as backfill or in gardens and landscaped areas.

For full details of the process, visit our Japanese Knotweed page.

• If you are a developer or have commercial land that contains Japanese Knotweed, contact one of our experts today