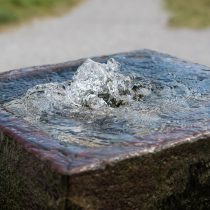 Groundwater supplies between 25% and 40% of the world’s drinking water as well as being essential for farm irrigation. And if it becomes contaminated it requires remediation to protect the health of humans and animals as well as the environment.

But what is groundwater? And how does it become polluted and contaminated?

Water continually moves through the environment, which is the water cycle. When water evaporates from the seas and oceans it condenses into clouds and then falls as rain. The water then flows into rivers and returns into the sea.

But one aspect of rainfall that is often overlooked is groundwater. This is the rain that falls on the earth’s surface.

Once it falls, the soil acts like a giant sponge and it soaks in. Although vegetation takes some of the water, the rest trickles down through the layers of the earth. This water is known as groundwater, which is contained in permeable rock formations known as aquifers.

Most groundwater is clean but it can become polluted or contaminated as a result of everyday human activities.

Groundwater doesn’t usually concern us until a problem arises. All sorts of pollution can leach over time and reach groundwater.

The main source of contamination is from man-made products, such as oil and chemicals. When such pollutants reach groundwater it becomes unsafe and unfit for human use.

For example, pesticides and fertilisers can find their way into groundwater supplies over time; motor oil may also seep in to affect it. Untreated waste from septic tanks and tanks containing oils can also leach into groundwater.

We helped deal with a kerosene spillage at a farm. Swift action meant the liquid was prevented from entering the groundwater. If a tank had a small leak that was undetected, there’s every chance the kerosene might have reached it.

Other contaminants include spills from industrial operations, leakage from landfills and infiltration of something called ‘urban runoff’. This happens when drainage systems or sewers are overwhelmed during storms and floods and the water runs onto the land.

As well as potentially being consumed by humans, polluted groundwater may also reach the food chain due to its use in farm irrigation. And it can also harm wildlife.

Dealing with contaminated groundwater is essential for the health and well-being of humans and wildlife, as well as the environment. This is where remediation is necessary, which means either removing pollutants or carrying out conversion methods to turn them into harmless products.

Contaminates include physical, inorganic chemical, organic chemical and bacteriological items. By applying state-of-the-art techniques, ATG Group can remove pollutants from groundwater to bring it to a legally sound standard.

First of all, we identify contaminates and carry out a risk assessment. We will use several techniques, which include:

Looking after groundwater is essential for health and well-being. Treating and remediating any leaching is necessary to safeguard people and the environment.

It is an offence to cause or knowingly permit a water discharge activity unless you are complying with an environmental permit or exemption.

To find out more about our Groundwater Remediation services, contact us today.