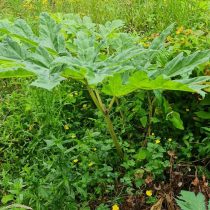 Despite its attractive appearance, giant hogweed is an invasive and dangerous plant species, which is harmful to both humans and the natural habitat.

Giant Hogweed is commonly found in British gardens and along riverbanks and can reach up to 20 feet high. It is dangerous to humans as it causes major irritation to the skin due to the toxins in the sap. It can be easily mistaken for cow parsley, so it’s very important to learn how to identify it.

Why is it dangerous to touch Giant Hogweed?

When the Hogweed’s sap comes into contact with human skin, a chemical reaction begins that cause it to burn. Within the sap stalks lurks a chemical called furanocoumarin which reacts with our skin and changes the way it absorbs to UV light. If the affected skin is exposed to sunlight, blisters will begin to appear within 15 minutes and continue to develop over the following 48 hours.

If you accidentally get Giant Hogweed sap on your skin, Healthline says that you should wash the area with mild soap and cool water as quickly as possible.

Is Giant Hogweed prevalent in your area? WhatShed’s Live Map will keep you up to speed.

The easiest way to recognise giant hogweed is by its stem which is thick, about two to four inches wide, with dark-red blotches and thin, white bristles. When it’s fully grown it is usually around 10-15 feet tall, and spreads very quickly. Leaves are green, jagged, and can be as large as five feet wide. The leaves may also have thin, white bristles. 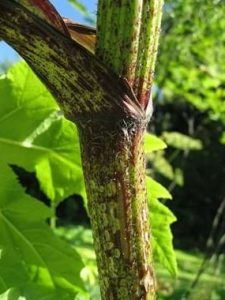 The Woodland Trust summarises everything you need to look out for:

Stems: the stems are green with purple blotches and stiff, white hairs. The stems are hollow with ridges and a thick circle of hair at the base of each leaf stalk
Leaves: the leaves are huge, and are often divided into smaller leaflets. The Woodland Trust compares them to rhubarb leaves, with irregular and jagged edges, with the underside of the leaf being described as hairy
Flowers: the flowers of the Giant Hogweed appear in June and July, and are small and white and appear in clusters on “umbrella-like heads” that face upwards
Seeds: the seeds are dry, flattened and an oval shape, almost 1cm long and tan in colour with brown lines.

Although you do not legally have to remove Giant Hogweed from your property or land, you must be actively making steps to ensure it does not spread to neighbouring land. If it spreads to an adjacent property, the owner could take legal action against you. Due to it’s toxic nature, the majority of land owners will have it removed, especially if it is in an area that is frequently used.

Read about how ATG Group remove and control Giant Hogweed in our Alpha Housing Case Study.

How do I know if my house has subsidence?

08.06.2022 Research from insurance company LV= in 2021 shows that more than half of homeowners do not know what subsidence is. The study also shows that they do not know how to spot it. Other findings included: •   One in five homeowners have noticed signs of potential subsidence but 26% didn’t... Read More

17.05.2022 Property valuers have scrapped a rule that determines whether Japanese knotweed is a threat to property. Earlier this year, The Royal Institution of Chartered Surveyors (RICS) issued new guidance regarding the distance the invasive species is considered a threat to buildings. Previously, valuers... Read More

13.05.2022 Season of growth During the spring months, Japanese knotweed begins to grow rapidly. This thick, invasive, and destructive plant grows between 10cm and 20cm a day with roots deep in the ground, making it difficult to remove. The plant will keep on growing throughout summer before dying back... Read More