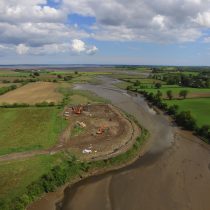 Waterways are extremely important for the environment – but developing contaminated land by waterways can compromise their role.

Waterways across the world have long been a source of employment, particularly in heavy industries, such as shipbuilding or warehousing.

Over the years, canals and rivers including the Thames, the Lagan and the Mersey have been transformed. As heavy industry has moved out, housing and leisure projects have moved in.

But waterways’ renaissance for living and leisure means developers often have to remediate sites used commercially for decades, if not centuries, before they can build on them. Working on such sites requires careful handling because contamination, such as heavy oil, risks leaching into waterways.

Waterways not only offer employment or a great place to live, they’re crucial for carrying water and nutrients around the earth. As well as acting as drainage channels for surface water, they’re also the natural habitat for many species. So protection of them is paramount.

When working on contaminated land by waterways, protecting the environment is an overriding necessity. Indeed, the Environment Agency can impose huge penalties if you fail to do so.

As these sites undergo transformation, developers must dismantle the infrastructure of industry, which can become a headache.

For example, a group of housing developers with plans for 900 homes near Comber, County Down, had to deal with a difficult site that needed to protect the nearby River Enler. The site had been used for unlicensed waste for many years and 100,000 tonnes of material was estimated to be on site.

The site is a Ramsar site, which is a wetland site designated to be of international importance. So, the solution had to take into account its importance.

How to protect waterways

Traditionally, contaminated sites by waterways are dug out and the soil dumped at special landfill sites. But at Comber, the cost could have reached £7million using such traditional destructive methods.

We were asked to draw up a plan to deal with the contamination and successful achieved an outcome under the £900,000 budget. Our innovative solution, which was less invasive to the environment, fully protected and still protects the River Enler. Check out our video about how we dealt with the site here.

One of our methods includes our innovative LockedIn® technology. This revolutionary process not only safely locks in contaminates, it is better for the environment because you don’t need to move the soil offsite.

We’ve already looked at groundwater pollution and how not developing land within guidelines can risk polluting waterways. But what about other causes of water pollution?

There are many effects to the above causes. These include disease and not just for aquatic life but also humans who might drink contaminated water. They make themselves vulnerable to various life-threatening illnesses like hepatitis, cholera, typhoid, and many other water-borne diseases.

Another issue is the impact on the food chain. If aquatic life tends to accommodate as per the polluted water, it is highly possible that the marine species may have toxins and pollutants in their body.

When humans eat fish or shellfish they can end up consuming the toxins and pollutants too.

The chemicals available in the water body promote the growth of algae. This algae ends up forming a thick layer over the ponds and lakes. The bacteria present in the water tends to feed on algae, causing the amount of oxygen in the water to decrease, impacting the aquatic life of the entire water body.

Many reports claim that by 2025, two thirds of the world will face water shortages. The only way to offer the coming generation hope is by following the right water conservation practices.

AT ATG Group, we start by stopping the spread using socks and booms to collect any substances that may still be travelling in the water. Afterwards, we’ll begin to collect and remove it from the waterway.

We have many remediation processes, including the use of absorbents, cushions, oil-water separators, skimmers and more.

If you are looking for waterway remediation, contact us today and let us explain to you how we can help.

We finally receive The Queen’s Award

22.09.2021 ATG Group has finally been handed The Queen’s Award for Enterprise in Sustainable Developments. Presentation of the prestigious accolade was delayed by the coronavirus pandemic. And we were delighted that all our team was on hand to receive it at a special ceremony. We received The Queen's... Read More

People in our business: Eddie Mack

10.09.2021 Eddie Mack joined ATG Group three years ago to help increase awareness of our services and attract new clients. Here, we find out a little bit more about what makes him tick! What is your job with ATG Group, Eddie? I am the Business Development Manager. What does your job entail? My work mainly... Read More