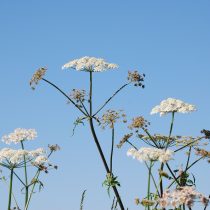 Giant Hogweed is ‘the most dangerous plant’ in Britain. And it’s hardly surprising when you see what its sap can do!

Last week, Northern Ireland’s regional burns unit reported seeing a rise in cases associated with the plant. Earlier this year, a baby was badly burned when she came into contact with its sap.

Giant Hogweed is among a number of invasive species that threaten the existence of native plants. Another is Himalyan Balsam and Royal Marines were drafted in to remove it from a site a few years ago.

Eliminating invasive plant species can be difficult if it isn’t done properly. All invasive species need to be dealt with, especially in public areas or if you are a developer.

Believe it or not, Giant Hogweed is part of the carrot family and is mistaken for common hogweed or elderflower. Despite its pretty appearance, it hides a nasty surprise!

The plant contains toxic components in its leaves, stems, roots and flowers and seeds, which can blister your skin and leave it hypertensive to ultraviolet light. As a result, your skin can swell and is easily burned in sunlight.

In the worst cases, the plant can also cause blindness if its sap comes into contact with your eyes.

Symptoms are not usually noticed for 24 hours and can be made worse if you are over-exposed to sunlight. So, if you come into contact with its sap in the summer unnoticed, it can be highly dangerous.

Giant Hogweed – which was introduced in the 19th century as an ornamental plant – is an invasive plant that can also harm the environment.

It is usually found growing in areas that have damp soils, such as riverbanks and coastal areas.

Removal of Giant Hogweed cannot be done easily as it is so toxic. Gloves, full-body and eye protection are required if tackling it. Due to the risks, it is best dealt with by experts and we can offer a free survey to provide the best option to deal with it.

Like so many invasive species that threaten our indigenous plants, the Himalayan Balsam was introduced to the UK in the 19th century as an ornamental plant.

The tall plant can reach heights of three-meters (10-feet) and it has fleshy, purple-red stems that look similar to bamboo stems. Usually found near watercourses and woodland, the seed hearts explode when touched and release hundreds of seeds.

There are about 800 seeds in each pod, on average! These seeds are carried by the wind or water, so growth can quickly get out of control.

The biggest issue is that because they strip riverbanks of indigenous plants, they leave them bare in the autumn and winter. As a result, they increase the rate of riverbank erosion.

As they are in flower for most of the summer, they distract pollinators of native plants as they contain a lot of nectar.

According to the National Trust, the Environment Agency and Wildlife Trusts, removal of Himalayan Balsam could cost £300 million!

Pulling up the plant is usually the best way to deal with Himalayan Balsam. Carrying this out in winter is best before the pesky pods appear.

If you have problem with invasive species – including Giant Hogweed, Himalayan Balsam or Japanese Knotweed – and need to treat it on your land anywhere in the UK or Ireland, contact us for a free survey.

The people in our business: Ciaran O’Neill