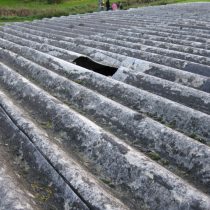 Asbestos is banned in the UK but finding it within buildings being demolished or refurbished is common. For decades it was used in the construction of buildings around the UK and Republic of Ireland for insulation and fire-proofing. It is very useful and inexpensive, but its fibres are highly toxic and cause breathing difficulties.

Asbestos is a group of fibrous minerals made up of fine needle-like fibres. Crushing raw asbestos extracts other minerals within it. As a result, its make-up changes into the cardboard-like appearance you usually see. It also strengthens products such as cement, paper and cloth.

There are six types in total. The most common types in the UK before the ban is chrysotile (white), amosite (brown) and crocidolite (blue).

Asbestos does not harm your health if undisturbed. The issues arise when during demolition or building renovation. Brownfield sites that were home to industrial buildings are likely to contain asbestos during demolition. It was commonly used in the late 1800s but there is evidence to show that the fibre was used as early as 2500BC.

Banned across the UK, the Republic of Ireland and most parts of Europe, it is still legal in some countries. This includes the US and India and is used under restrictions in the likes of China and Russia.

Where is it used?

There are a number of products that contain asbestos. It was even used in talcum powder and toothpaste in the 1950s. More commonly, you may find it was used for in a number of items in construction, including:

As it was used throughout the last century, a lot of older buildings may contain asbestos.

Why is it dangerous?

The Health and Safety Executive says that more than 5,000 people die annually through exposure to asbestos. Its use grew throughout the 1920s due to its cost effectiveness. It was as early as 1924 that the British Medical Journal published the first case of lung cancer related to the material.

Many years of research uncovered that its dust becomes dangerous when inhaled or ingested. As the body cannot break it down, it effectively becomes ‘stuck’ within it.

The trapped fibres and dust cause inflammation, scarring and degrading of cells, which results in severe genetic damage to the body. The fibres are microscopic and this makes it extremely dangerous. You cannot taste or smell it and it is hard to detect.

If someone is exposed to the fibres for long periods, it can cause incurable chronic lung disease, known as asbestosis. It can develop into pleural disease, mesothelioma (a tumour in the line of the lungs) and lung cancer.

Asbestos needs handling with extreme care and preferably by contractors with experience. Some is licensed, meaning contractors licensed by the Health and Safety Executive must remove it.

ATG Group can deal with non-licensed removal of asbestos, such as fragments from contaminated soils. Risk assessments are needed before removal and we are able to conduct these and advise on its removal.

If the asbestos is high risk, it falls under licensed removal. In such circumstances, we will work with licensed partners to remove it.

Anyone who is planning on carrying out major renovations to buildings or demolition, you must carry out asbestos risk assessments. Legally, you must adhere to the Control of Asbestos Regulations 2012.

If you are carrying out major works or demolishing buildings, you can contact us to carry out an asbestos risk assessment.